I have a few things to say to law enforcement officials across this country. Not Obama’s toadies like Loretta Lynch and James Comey. I’m talking to the local cops, FBI agents, detectives, DEA, crime scene investigators, SWAT Teams, and all the other brave men and women who are out there risking their lives, keeping us safe, and working hard to maintain law and order. From the bottom of my heart, thank you!

I genuinely feel for you guys. Your jobs were already hard enough, but now you have to worry about your career being ruined if you ever have to defend yourself against a punk thug like Michael Brown or Alton Sterling. Even worse, you have to constantly look over your shoulder in fear of being ambushed by a lunatic who has been brainwashed by the radical anti-police leftists in this country.

Freedom is not possible without law and order.

Civilians, put yourselves in their shoes. These officers are only human, just like the rest of us. Sure there are a few bad apples, but I believe 99.9% of them are honorable and have the right intentions. There are some ridiculous laws in this country, but the police didn’t create them. Would you like it if your boss forced you to wear a body camera? How would you feel getting death threats for a simple mistake, or even when you did the right thing?

Close your eyes and imagine that you live in a violent third world hellhole like Syria or Yemen. Women are being raped and your village is being burned down by terrorists. There are no phones to call the local police who probably wouldn’t show up anyway, or don’t even exist to begin with. Then picture yourself in an iron-fisted police state like Cuba or North Korea, where law enforcement is the biggest threat to your safety. Disturbing, yet these are terrifying realities for millions of people all over the world that should give you a deeper appreciation for the life you have and the courageous individuals protecting you day and night.

My thoughts and prayers go out to the loved ones of Montrell Jackson, Brad Garafola and Matthew Gerald; the three Baton Rouge Policemen who were brutally murdered yesterday. In the tense aftermath of Alton Sterling’s death, Officer Jackson posted a message of unity on Facebook that said in part, “These are trying times. Please don’t let hate infect your heart. This city MUST and WILL get better.”

I would also like to honor the five officers killed in Dallas less than two weeks ago, and every other law enforcement official who has fallen in the line of duty.

President Obama said some nice things yesterday, but his words were essentially meaningless. It’s too little too late. He has turned his back on you police officers, and our Military, in too many ways and too many times. You deserve better than half-assed lip service. Fortunately (and unfortunately) Obama doesn’t represent the views of most of us. The United States of America are better than that spiteful Marxist egomaniac. 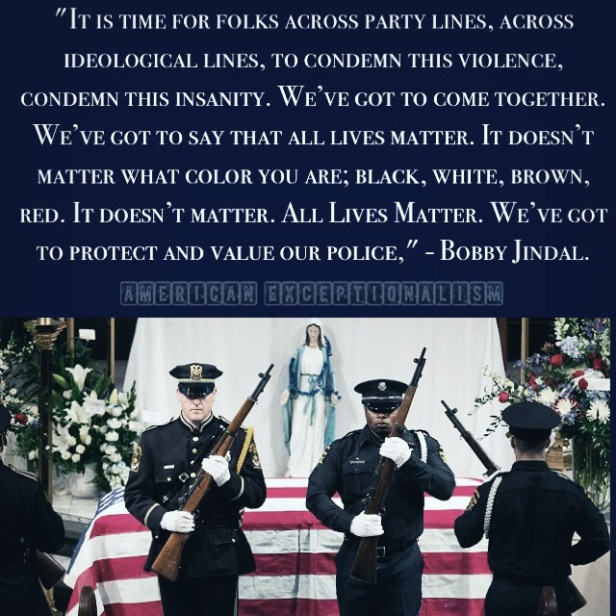 So I think (I hope) that I speak for the overwhelming majority of Americans when I say that you have our unwavering support. We understand that without you there would be absolutely no peace and tranquility whatsoever. Freedom is not possible without law and order. Daily life would look like a scene from The Purge in the absence of your protection. We love you, we respect you, and we sincerely appreciate everything you do so that we can live in a civil society. Keep up the good work.

2 thoughts on “A Message To Law Enforcement ”