Take off that silly looking Make America Great Again hat for 5 minutes so we can look at this race objectively. What were our current Presidential candidates were doing 20 years ago?

As First Lady, Hillary Clinton was working hard to silence the victims of her pervert husband and yelling vulgarities at our Secret Service agents who were risking their lives to protect her. She’s probably the most corrupt and malicious Presidential nominee of a major party in our nation’s history… it’s a tough call between her and Barack Obama.

Her crony friend Donald Trump was bankrupting casinos and shoveling massive amounts cash into the campaign coffers of shady liberals. Up until 2010 the overwhelming majority of Trump’s political donations went to Democrats. His shills and surrogates like Eric Bolling are quick to defend with lame excuses like “he’s a businessman so that’s okay”. No it’s not. Being a real estate tycoon shouldn’t give him a free pass for helping elect socialist politicians because it was financially beneficial to him. That just shows how selfish he is.

Gary Johnson was the owner of Big J Enterprises (which he sold in 1999), a multimillion-dollar mechanical contracting company that he started from nothing, and earning his nickname “Governor Veto”. His spending record isn’t perfect; but it’s decent, especially considering the circumstances of his tenure. He vetoed over 700 bills from a legislature that was heavily controlled by Democrats for most of his 8 years in office.

I’ll acknowledge that Johnson has some positions on national security, drug legalization (which I actually support), religious liberty, and especially immigration that are difficult for many Republicans, myself included, to accept. On national security he’s actually rather pragmatic for a Libertarian. One silver lining with Johnson is his solid consistency on the issues, unlike his malleable opponents Trump and Hillary. Johnson is like Jeb Bush in the sense that I disagree with both of them on a few key issues, particularly immigration. At the same time I respect them for their fairly conservative records as governors, not changing where they stand every time the political wind blows, and the virtuous manner in which they conduct themselves.

I wouldn’t smoke crystal meth because it’s not rat poison, and I won’t vote for Trump just because he’s not Hillary.

Has Gary Johnson been politically, personally, or in some other way involved in any major scandals or unlawful activities throughout his entire life? Not that I’m aware of. Dozens of books have been written about Hillary and her unindicted, felonious corruption. On a weekly basis Trump makes detestable statements that should disqualify him from running for county treasurer.

For those of you Trumpsters claiming that voting Libertarian only helps Hillary, you’re factually wrong which was actually surprising to me. Recent polling data shows that Gary Johnson takes away equally from Trump and Clinton. The CBS News/New York Times poll shows Trump and Hillary tied at 40%. When Johnson is added to the mix they are still tied at 36%, with the Libertarian candidate receiving 12%.

I proudly volunteered for and donated to Ted Cruz’s primary campaign. He’s a brilliant statesman and I think he has a bright future, but his political career is of little concern to me. This election is not about Cruz, Trump, Bernie, Hillary, Gary Johnson, or any other politician. It’s about us, the American people.

The only argument Trump supporters, many of whom are blindly drunk on his cult of personality, have is that he’s not Hillary. They have no substance based, affirmative explanation why he would be a good President. I wouldn’t smoke crystal meth because it’s not rat poison, and I won’t vote for Trump just because he’s not Hillary. I’m under no obligation to support the GOP Nominee. It’s his responsibility to earn my vote, and he has failed miserably at doing that. I also don’t have a religious devotion to the Republican Party. 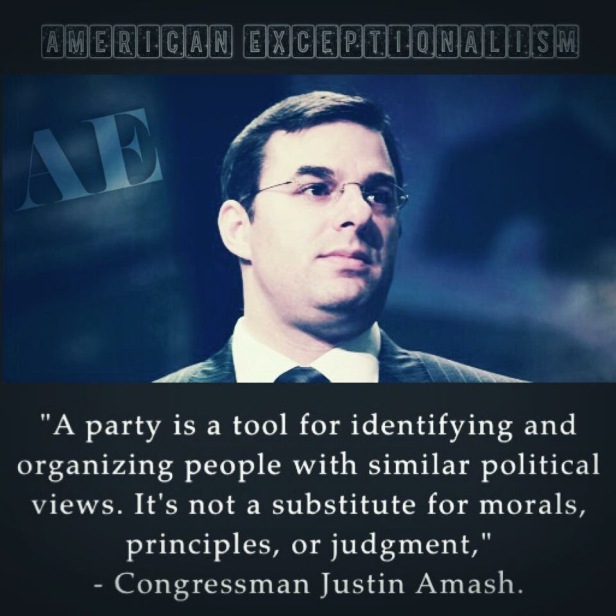 We should select our next President based on their morals, character, policy positions and records. Unfortunately there is little doubt in my mind that enough disenfranchised Republicans will not vote at all (which is how Obama beat Romney). Most of the others will sheepishly line up behind the corrupt, anti-trade, big government candidate almost exclusively based on the “(R)” next to his name. The end result will be disastrous, basically a third term of Obama. These are dark times for freedom loving Americans.

Even if hell freezes over and Gary Johnson gets elected, our problems would not be permanently solved. We had a Constitutional Conservative as President for most of the 1980’s, yet here we are.

Fortunately a window of opportunity remains for us to save our country from inevitable decline. But it’s slowly shrinking as each day passes. Washington has become too powerful and it’s not going to fix itself. The Framers were prescient enough to understand the possibility of the federal monstrosity we have today. That’s why they gave the states power to reign it in. Our best opportunity for lasting change is Article V of the Constitution, which allows for a Convention of the State Legislatures to amend it.

This Convention of States movement is gaining serious momentum and we need all the help we can get. It gives us a chance to implement a flat or FAIR tax, limit federal spending and debt, set term limits for Congress and Supreme Court Justices, etc. Mark Levin wrote an excellent book about this process and the amendments he believes are necessary, The Liberty Amendments: Restoring the American Republic. Right now we have a legitimate shot at restoring limited, Constitutional government. Let’s make sure we don’t allow this precious opportunity to be wasted.