As Republicans we cannot afford to nominate another boring, unprincipled, “moderate” candidate like Mitt Romney or John McCain. These are perilous times for America and we need a strong, principled, effective leader. With the right leadership, defeating the Democrats will be easy. Our real challenge lies in getting past the Republican establishment.

Constitutional knowledge, substance on the issues, consistency in positions, integrity and decency matter to me in choosing a Republican nominee. If none of that matters to you then vote for Marco Rubio, who ran for the Senate fiercely opposing amnesty, then almost immediately turned his back on the conservatives who elected him by joining the “Gang of 8” bipartisan Senators who tried to legitimize Obama’s executive amnesty legislatively. Worse yet if brash political incorrectness is most important to you then vote for the vulgar, loud mouthed, rambling old man named Donald Trump who supports the mandates in Obamacare, because he “doesn’t want people dying in the streets”. If you support Donald Trump, that’s fine, you’re entitled to your opinion. But don’t tarnish the word “conservative” by using it to refer to that guy. Trump is not, and has never been a conservative. Considering Trump’s 60% unfavorability rating, it would be very difficult for him to win the general election.

Mr Trump look out the window of one of your skyscrapers in New York, Las Vegas or wherever and I doubt you’ll see anyone dying in the streets. This is not Cuba or Venezuela. They have universal coverage too by the way, not much freedom and not many people getting quality medical treatment though. For decades US law has required hospitals in this country to provide treatment to anyone requiring emergency medical care; regardless of citizenship, and even if they don’t have insurance or the financial resources to pay for said care. That’s why the American people were never dying in the street. At least Mitt Romney gave timid lip service to getting rid of Obamacare, Trump is openly embracing its worst features.

As a Constitutionalist who believes in states rights and federalism, I don’t think our federal government should have any involvement in healthcare whatsoever. But that seems unlikely, and the Singaporean healthcare model would certainly be an improvement from our current system. Medicare is a government Ponzi scheme that’s been forced on us since 1965, rife with corruption and inefficiency. The monstrosity that is Obamacare piled on with a confusing 20,000 page web of regulations that are killing innovation and job growth.

Back to my main point, the last time we had a serious and principled conservative run for President (Ronald Reagan) he won two massive landslide elections and accomplished great things. He slashed tax rates, revived industries, rolled back regulations, cut spending and in the process fostered a booming economy that created 25 million new jobs. He won the Cold War without any direct military conflicts with the Soviets. Without President Reagan’s bold yet cautious leadership, the “Evil Empire” might still exist today. Unlike George W. Bush, the Republicans never controlled both Houses of Congress during Reagan’s Presidency. Imagine the progress that could be made in this country if Mike Lee was Senate Majority Leader, we had a President like Reagan and a Speaker of the House like Newt Gingrich. Reagan wasn’t perfect, but he was the greatest President in modern American history and we can learn so much from the example he set. True conservatism not only resonates well with the American people, it generates freedom and prosperity. 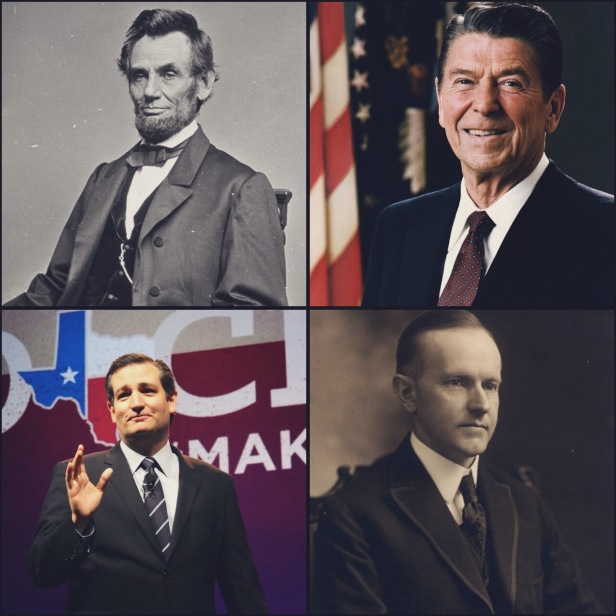 I will credit George W. Bush for his tax cuts, his strong leadership that America needed after 9/11 and for bringing integrity back to the office of the Presidency after 8 years of Bill Clinton’s perverted/criminal antics. In his 1996 State of the Union Address, Clinton declared, “the era of big government is over.” Unfortunately Clinton’s successor proved him wrong. In contrast to the Reagan years, from 2001-2007 Bush and the GOP had both houses of congress, and what was accomplished? Well they massively increased spending, created $6 trillion in debt, spent a fortune on nation building in Iraq, made a huge expansion to Medicare even though the program was already unsustainable, quasi-nationalized our schools with No Child Left Behind, and topped it all off with monstrous corporate welfare bailouts (TARP). Bush was still was President when the Tea Party movement began in 2008, largely because conservatives like myself were sick of his big government policies.

I was very disappointed in the House Freedom Caucus a few months ago when they courageously took down John Boehner, only to replace him with Boehner’s hand picked successor Paul Ryan (this was after a failed attempt to give the job to his goober friend Kevin McCarthy). Speaker Ryan is fundamentally the same as his predecessor; just subtract a whiskey bottle from the desk drawer, then add a little more charisma and likability.

Remember 2010 when the Tea Party rose up and gave control of the House to John Boehner and he did nothing. Finally in 2013, during his first year in the Senate, Ted Cruz took a stand against Boehner and McConnell by leading a government shutdown in an attempt get rid of at least parts of Obamacare. The shutdown ended less than three weeks later when Republican Congressional leadership made some backroom deals, caved in and gave the Democrats everything they wanted. Jennifer Rubin at the Washington Post, the stand for nothing moderate country club Republicans who comprise most of the Wall Street Journal Editorial Board and the rest of the Republican establishment scorned Cruz; making claims along the lines that his shutdown destroyed our chances of taking the Senate and might even cost us the House. Obviously they were wrong, his shutdown helped if anything. The 2014 midterm elections gave Republicans the largest Congressional majorities we’ve had in almost a century. Yet what do we have to show for it?? Not one thing.

Almost immediately after being confirmed Majority Leader of the Senate Mitch McConnell announced there would be no government shutdowns, which meant our victory was basically hollow. Harry Reid and Nancy Pelosi are the de facto leaders of Congress because Mitch McConnell and Paul Ryan (and John Boehner before him) have willingly surrendered their power to the Democrats.

Newt Gingrich doesn’t get enough credit for forcing Bill Clinton to balance the budget and make welfare reform back in the 90’s. Paul Ryan and Mitch McConnell are the President’s rubber stamp. They side with Obama more often than they do with their conservative colleagues, and use their enormous power to stifle conservatives from having any real impact. All they seem to care about is clinging to power and pleasing their crony capitalist donors on K Street.

The President and his radical Democrat Party have done enormous damage to this country. Although they are deceitful statists who are corruptly destroying America, liberals seem to have a backbone and fighting spirit that one can’t help but admire. They just don’t give up.

Take for example 2005, when George W. Bush and the Republicans attempted to partially privatize Social Security. They controlled both Houses of Congress; but lacked the courage and political will to get blamed for a government shutdown, or use the nuclear option which is to remove the filibuster rules in the Senate. Harry Reid fought hard and successfully filibustered.

These tenacious qualities are lacking in too many Republicans today. No one really knows what Mitch McConnell and Paul Ryan’s agendas are, besides funding the export-import bank and preventing a government shutdown. It’s not difficult to figure out who these corporatist Republican cronies are, just go to Conservative Review and check out their voting records.

The National Debt is dangerously high at over $19 trillion and increases every day with record spending levels. There are tens of thousands of far reaching and dictatorial regulations that control every aspect of our lives, stifle economic growth and crush out liberties. Most of these regulations are concocted by unelected bureaucrats, so much for consent of the governed. We have serious national security threats at home and abroad, yet our military has been weakened significantly. President Obama refuses to enforce our immigration laws. Meanwhile illegal aliens are committing heinous crimes, take advantage of all kinds of government welfare programs, and take jobs from hard working citizens. Our healthcare system is being destroyed. The President is pushing for more gun control and is working hard to destroy the 2nd Amendment, while he allows the barbaric terrorist regime in Iran nuke and obtain over $100 billion which they will obviously use to fund terrorism. Bob Corker, John McCain and other feckless Senate Republicans enabled the President to make his disastrous deal with Iran by surrendering their constitutional treaty power. Sadly, the list goes on.

What have Steve Scalise, John McCain, Reince Preibus, Lindsey Graham, and the rest of the establishment Republicans done to address these issues? Nothing. Worse actually, they’ve enabled the Democrats, and in many cases helped them. Notice how these clowns put so much more effort into fighting conservatives than fighting Obama. If they had to choose between Hillary Clinton and Ted Cruz, the RINO’s would choose Hillary every day of the week and twice on Sunday. They can work with her. They might be in the minority, but with a Democrat in the Oval Office they can still push through the spending they want for their big corporate donors. On the other hand, a conservative president like Ted Cruz would be dedicated to cutting the big government pork and corporate subsidies that moderate Republicans have become so fond of.

Close your eyes. Now imagine it’s 1861 and America is on the verge of breaking apart. We already know which side of this issue Hillary Clinton’s party was on. What would each of our Republican friends running for president have done? Would they have bravely drawn a line in the sand like Lincoln, or instead tried to “reach across the isle” to “make a great deal” and “show they can govern”? When reading history it’s easy to say you would’ve done the right thing. Before Reagan gave his passionate speech at the Brandenburg gate in Berlin, demanding that Gorbachev “Tear down this wall!”, his advisers begged him not to. Which of these candidates do you honestly think would have risked the threat of being hanged for treason just to win independence and freedom?

It will be difficult to win with a candidate who runs around claiming he’ll “Make America Great Again”, but can’t explain in any specific detail what that means. I hear people saying the primary is over, and we need to just accept that Donald Trump is inevitable the Republican nominee. Trump currently has less than 5% of the delegates necessary to win the nomination. This race is far from over. I’m not ready to accept that our future President will be an arrogant, melodramatic goon who compares his opponents to child molesters and calls them p*ssies. “But he says what’s on his mind.” Go to a bar at 2 in the morning and I’m sure you’ll find someone else doing just that. Being a leader means that at times you speak out and say bold, courageous things that some might be afraid to. But it also means you have the prudence and self control to conduct yourself with integrity and show respect for others.